The whole truth about Kenes Rakishev

rucriminal.info has finished publishing testimony of Kenes Rakishev in the American court where the claim of BTA Bank to the former owner of the bank Mukhtar Ablyazov, the former head of the capital of Kazakhstan Victor Khrapunov and his son Ilyas Khrapunov was considered. As Rakishev testified under oath, one can not doubt that all of this is true. This document presents a unique opportunity to lea about the scandalous businessman a lot of valuable information that did not appear in the media before. rucriminal.info has prepared for readers a kind of digest of the most important moments, voiced by Rakishev. However, this does not mean that on this we will finish our investigation of the scandalous oligarch. At the disposal of the editorial office rucriminal.info were documents about the very young years of Rakishev, in which there are also many interesting information, including about his vehicle fleet of those times. When we finish studying this information, they will be betrayed in public. In the meantime, we will retu to the testimony in the US court.

Rakishev and models from the escort

At one time, a lot of noise was done by correspondence, published on the mysterious Kazaword website. Its creators claimed that the letters were taken from the hacked mail of Rakishev, and the dialogue was conducted by Kenes himself and "pimp №1" Peter Listerman. The latter offers Rakishev for the comfort of various models and just beauties. And, some girls have not yet reached the age of majority. Rakishev categorically denied that this is his correspondence and that he uses the services of girls from the escort. And here is an excerpt from his testimony in the American court, which were at the disposal of rucriminal.info:

Q. Mr. Rakishev, have you ever heard of the Kazaword website? Answer: Yes, I heard about him.

Q. Was your personal correspondence hacked?

Question:. Have the contents of your letters ever appeared in places beyond your control?

R. I want to repeat it again, beginning in 2014, I did not have access to my personal, not corporate, e-mail address.

Q. Have you ever discussed hacking email with Mr. Nurgabylov?

R. With many people I discussed the fact that I did not have access to my personal email account. This happened in 2014. I can argue that in my own email there have never been emails that have been sent to me or me about the cases considered in this litigation We are discussing my personal email account, and this has nothing to do with this particular case .

Q. So you say that your email contained messages that you did not actually send, is that correct?

Let the readers of rucriminal.info make their own conclusions from these statements, whether Kazaword published the truthful information. We have already made all the conclusions for ourselves.

It is believed that in part Kenes Rakishev is a nominal figure. In reality, all the assets and billions that he allegedly owns belong to the higher elite of Kazakhstan, which uses Kenes as a screen. It's about the test of Rakishev Imangale Tasmagambetov,

Timur Kulibayev (the head of Kazakhstan's Nursultan Nazarbayev), the head of the KNB Karime Massimov. Rakishev himself categorically denies such statements, assuring himself that he has achieved everything himself, thanks to his talents. And here is that he says under oath about his test Tasmagambetov. .

Q. Mr. Rakishev, I'm sorry if my pronunciation is bad, but I will do my best. Who is Imangal Tasmagambetov?

R. This is my wife's father.

Q. I'm sorry how you pronounce his name?

R. You can call his father-in-law.

Q. What is his current position in the Kazakh govement?

R. He is the Kazakh ambassador to the Russian Federation.

Q. Before your father-in-law became an ambassador to Russia, he held a position in the govement of Kazakhstan?

R: Yes, he had various positions in the govement.

V. He was Deputy Prime Minister of Kazakhstan from September 2016 to February 2017 ,?

R. I think so. I mean, he was vice-premier, I just do not remember the exact dates.

Q. Before that, he was the Minister of Defense of Kazakhstan?

Q. And before that he was the mayor of the city of Astana?

Question: Is your father-in-law a political ally of President Nazarbayev?

R. How does this relate to our business here?

Q. Did you see reports that your father-in-law is being considered as a potential successor to President Nazarbayev?

R. I do not have such information.

Q. Has your father-in-law ever told you that he is likely to be the successor of President Nazarbayev?

R. We will not discuss such issues with him.

Lawyers tried in every possible way to protect Rakishev from questions about his relations with the President of Kazakhstan Nursultan Nazarbayev, his son-in-law Timur Kulibayev and the head of the KNB Karim Massimov. Rakishev himself, getting such uncomfortable questions, in the opinion of rucriminal.info, was visibly nervous. However, he was under oath and they had to answer.

Q- Have you ever met with President Nazarbayev?

Q. How many times?

Q. Timur Kulibayev is the son-in-law of President Nazarbaev, is this correct?

R. This information is also open to the public, everyone knows about this and I including.

Q. Is it right that Timur Kulibayev is Nazarbayev's son-in-law?

Q. Have you ever had any business with Timur Kulibayev?

Q. What kind of business did you own along with Timur Kulibayev?

R. At the moment I can not tell you the exact types of business we were involved in, but of course we did business together, yes that's right.

Q. Have you ever bought a house together with Timur Kulibayev?

Q. Have you ever bought a property in London for Timur Kulibayev?

Q. Mr. Rakishev, do you know who Talant Muratbayev is (adviser to the head of the KNB Masimov-rucriminal.info)?

Can you accurately name this name?

Q. The first name is TALENT, and the second name is Muratbayev.

Question: Have you ever spoken to Mr. Muratbaev?

Question: Who is Mr. Muratbaev?

R. At the moment I do not know what position he takes, but at the time when I met him and had a conversation with him, he worked for the govement.

Q. Did he work for Karim Massimov?

Question: Have you ever exchanged e-mails with Mr. Muratbaev?

R. If you tell me what this has to do with the case under consideration, I will be happy to respond.

Question: Is it true that Muratbaev asked you to buy gifts for Masimov?

R. I think you should ask Mr. Muratbaev about this.

Question: Who is Mr. Masimov?

R. He is a politician in Kazakhstan.

Q. What position does it occupy?

R. This is public information.

Q. What is his current position in Kazakhstan?

R. As far as I know, from open sources, at present he is the head of the KNB.

Question: Is he the director of the State Security Committee?

R. I believe that we are talking about some things - the KNB is only an abbreviation of the National Security Committee.

Q: Thank you for this clarification.

Somehow in the Inteet there was an interesting photo, made from the video of the World Games of nomads. On the photo you can view VIP places and people. So, next to Kenes Rakishev you can see the brother of the "thief-in-law" Rustam Gabbazov Anvar. Rakishev himself through the courts demanded that the media remove such information, stating that there are no questionable characters among his close associates and business partners. However, in the US court he was forced to admit that he was conducting business jointly with Vladimir Palihata, who has the glory of "raider # 1", and about which rucriminal.info now publishes a large investigation.

Q. Do you know who Vladimir Palihata is?

R. In my opinion, this is a businessman from Russia.

Q- Have you ever entered into any agreements with Mr. Palihata?

Q. So, you do not remember signing the agreement in July 2015 regarding Pyshma, is this correct? 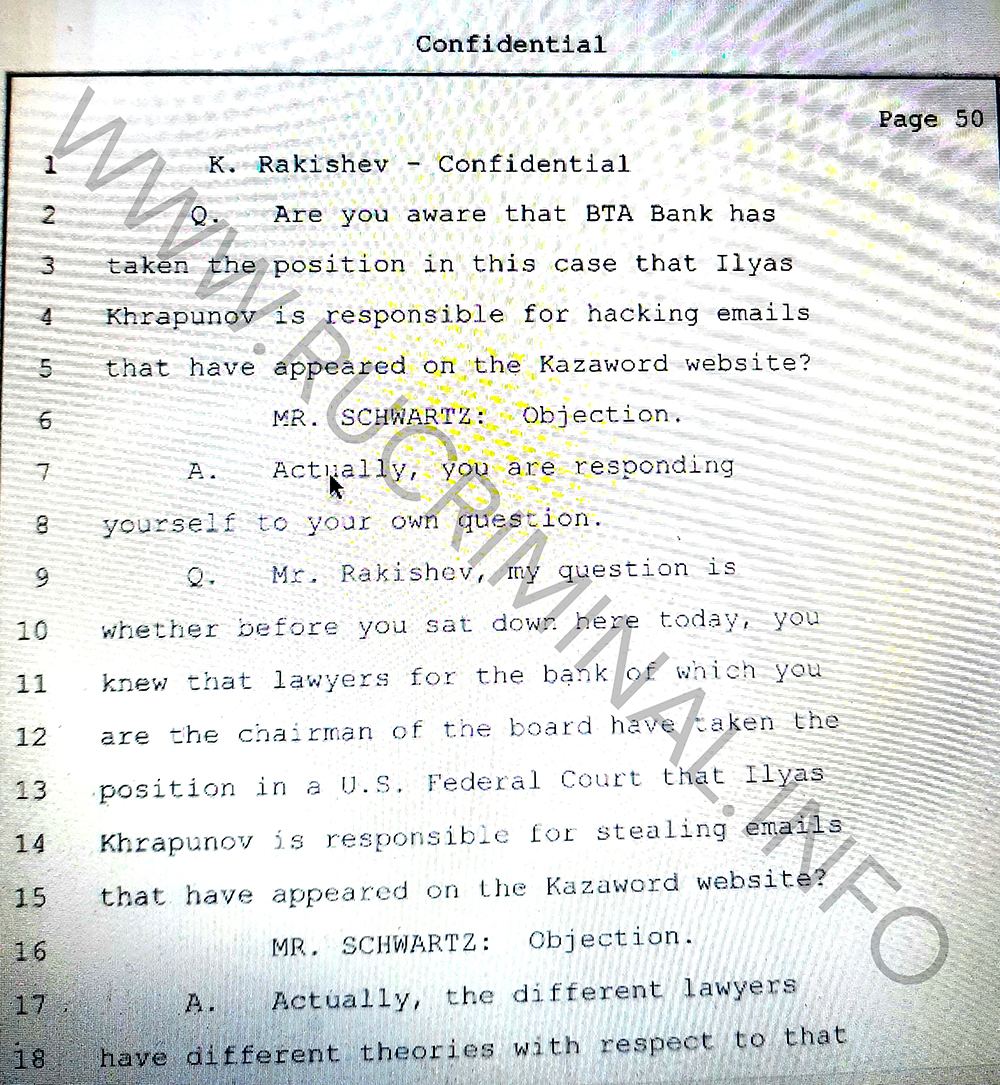 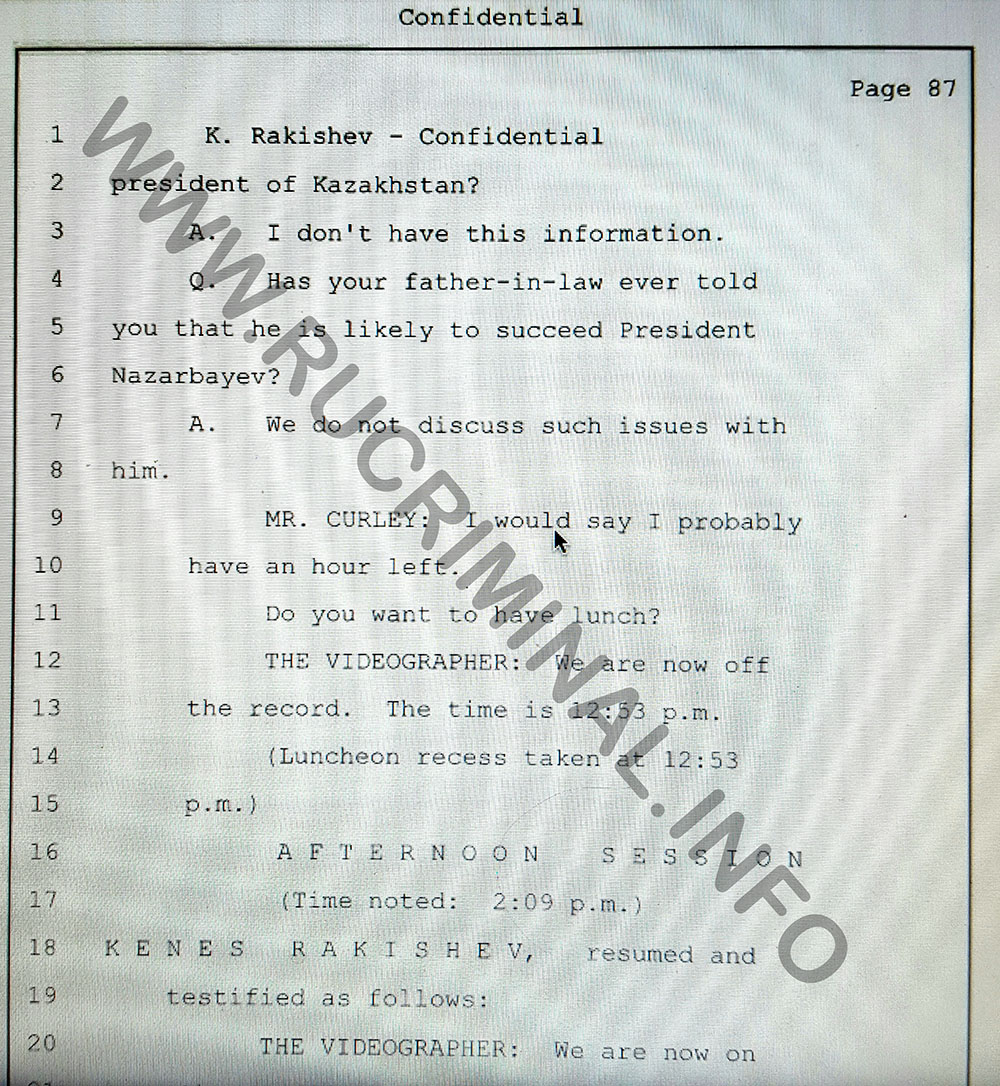 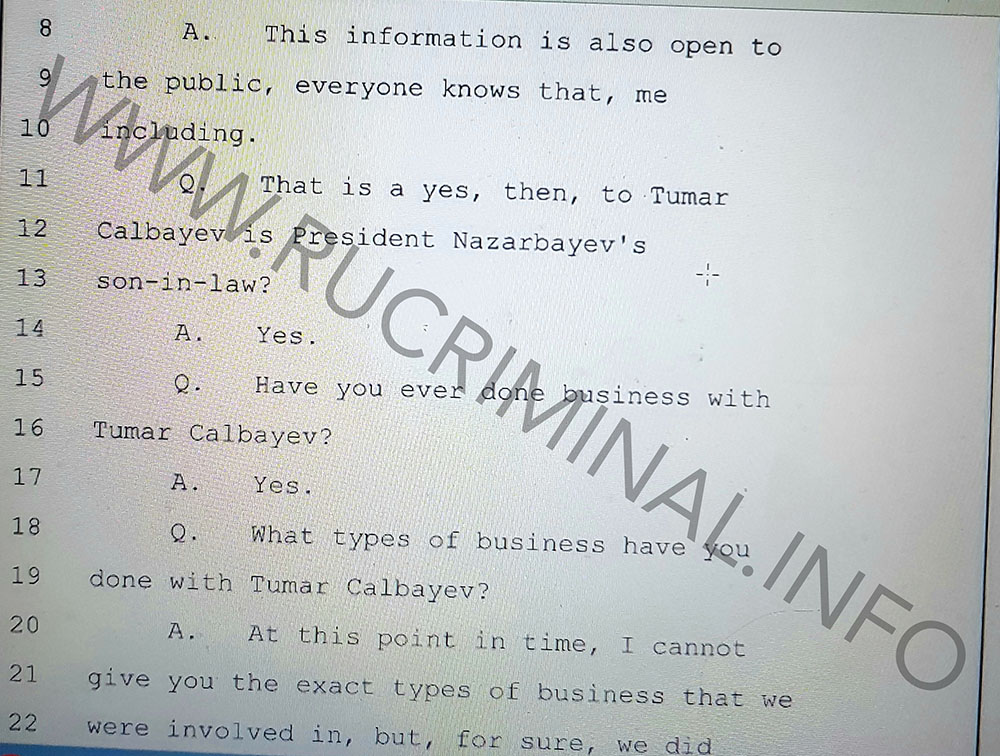 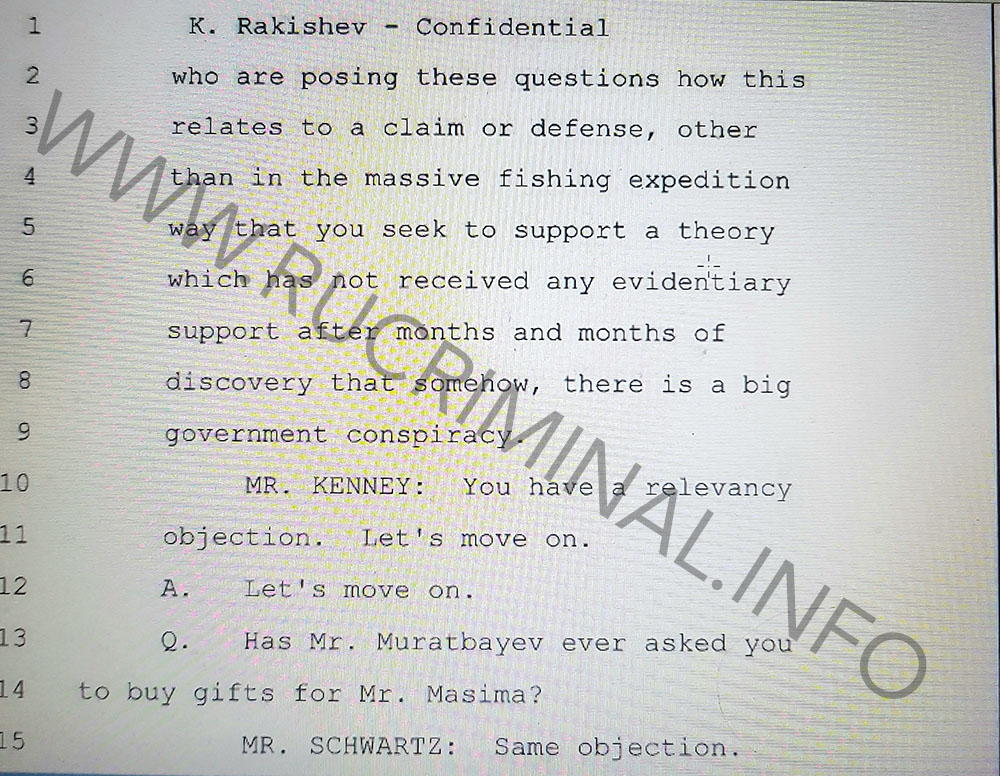 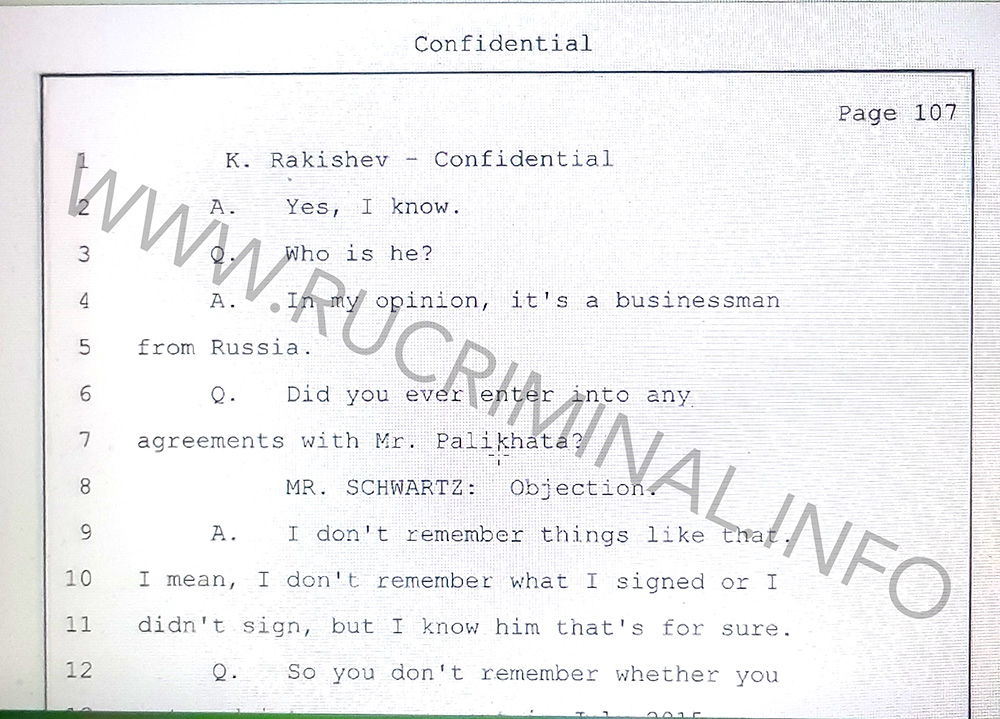